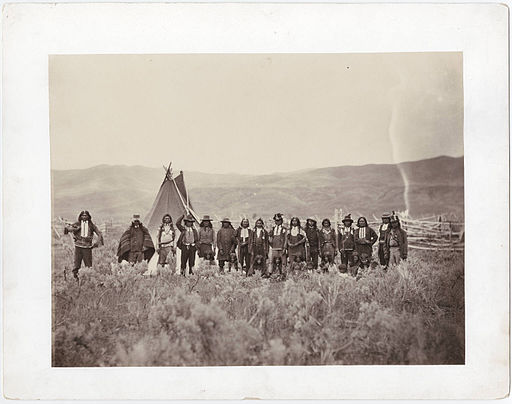 Above photograph is of Shoshone Indians, taken by Union Pacific Railways contractor-photographer Andrew J. Russell in 1869. One-sixth or more of the first Transcontinental Railroad travelled through Shoshone Nation lands. Photo courtesy of wikipedia.commons.org.

The subjects and presenters involved in the Railroads in Native America Gathering are national in scope, all focusing on the intersections between railroads and Native America, a fraught and dynamic story that extends over more than 160 years. Presenters will be both Native and non-native American speakers.

On the day before the gathering, on Thursday May 19, 2022, we are taking a field trip; unlike the rest of the gathering the field trip will cost $75 which includes paying for bus transportation, lunch boxes and guide honorariums (for those who are preparing to present). The field trip, unlike the Friday and Saturday gathering, will not be available via live-streaming.

The field trip will include intentionally long buried perspectives, knowledge and life ways, about traditional Shoshone life. The impact of the railroads will be the central focus of the tour; however, equal time will be given to the stories of life ways, migration and Native land use, treaties and cessation of lands, and difficult history with white settlers.

Shoshone traditional cultural lifeways will be discussed, as well as seasonal movement patterns and locations; diet–seasonal gathering, hunting and fishing; also the stories of railroads with Native America between northeast Nevada, Northern Utah, Southeastern Idaho and Southwest Wyoming. As the Shoshone peoples thrived as far west as the Sierras, and as far east as the Continental Divide; as did the Paiute peoples, who also lived and traveling on these same lands; the field trip will speak to the broader Shoshone peoples.

We will be traveling up through northeast Utah to southeastern Idaho, to the Bear River Massacre site (1863), and then west to Washakie, Utah, stopping along the way, as well as listening while on the bus, sharing stories and life ways of the Northwest Band but also of the Shoshone peoples in general.  We hope you will join us. As this time the limit is 50 seats. We will leave at 9 am (Ogden Union Station) and will return at 4pm. Lunch boxes will be provided as well as water. Restroom stops will be provided besides the lunch stop. We will be walking on uneven trail surfaces and in open fields. May weather in Northern Utah is unpredictable so dress accordingly.