Some diners ate the roasted grasshoppers by the handful, like roasted peanuts. Others thought the crunchy ingredient tasted better when mixed into the blue corn mush. 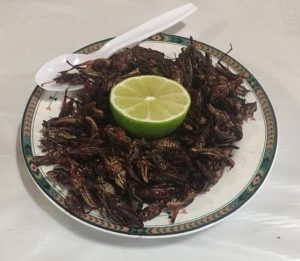 Native fusion might be the best way to describe the menu at the Urban Indian Center’s Native Foods potluck, featuring specialties from Utah’s eight tribes. Dishes ranged from the corn mush, infused with calcium-rich juniper ash, to bison and turnip stew and elderberry gravy. Side dishes included Piki and Kneel-down cornbreads, which are considered Hopi and Navajo versions of tamales, as well as pine nut cake and an anti-inflammatory Navajo tea.

The Four Corners potato, another traditional superfood, was a star ingredient at the second annual Indigenous Dinner: Reclaiming Ancestral Foodways, a fundraiser for the nonprofit Utah Diné Bikéyah, held last month at the Natural History Museum of Utah. 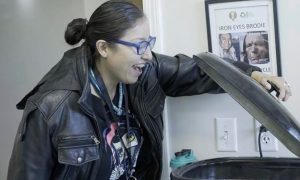 Reemphasizing ancestral ways, one dish at a time

Together the Utah dinners represent local chapters of a national food movement focusing on Native chefs who are working to reemphasize ancestral culinary traditions. These menus might even serve as a timely western twist on historical myths about Thanksgiving celebrations.

The Solanum jamesii, a nutritious superfood with a long history in the region, could best represent Utah’s stake in this culinary movement. The tuber is small and nutrient-packed, with twice the protein and three times the calcium and iron as the more common grocery-store potato (which are descended from Solanum tuberosum, a South American strain). 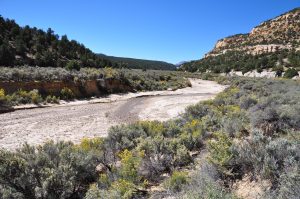 Food records in the stone

U. archeologist Lisbeth Louderback analyzed the starch residue and identified it as Solanum jamesii. With research partner Bruce Pavlik, a botanist, she also talked with Native elders to gather what Pavlik calls “lived knowledge.” “The two are perfectly compatible next to each other, and they tell a much fuller story then separately,” says Pavlik, conservation director at the University of Utah’s Red Butte Garden. 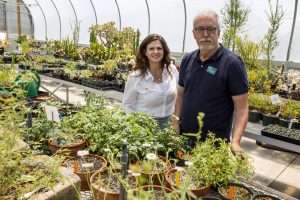 U. researchers  Lisbeth Louderback and Bruce Pavlik want to encourage cultivation of the Four Corners potato. (Courtesy University of Utah)

“Native people always knew about that potato,” says Cynthia Wilson, a Monument Valley native who holds a master’s degree in nutrition from the University of Utah. Wilson’s grandfather, a Navajo medicine man, called the tuber “ƚeeyi’ naa’mááz,” which she translates as “rolling underground in the soil.”

Wilson feels an urgency to document that information. Much of the ancestral knowledge of traditional foods hasn’t been documented or passed down to younger generations, Wilson says. 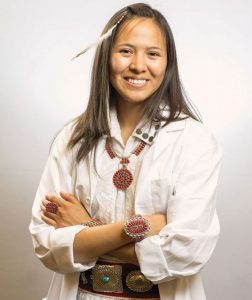 Last year, she launched the Utah Dine Bikeyah’s traditional foods program by conducting surveys of Native farmers. This winter, she plans to interview elders from the Navajo, Ute and Pueblo tribes about traditional foods and foodways, during what some tribes consider storytelling season.

Native people believe plants have spiritual powers, rooted in creation stories, and such plants have multiple uses as medicine, as tools, or as art. “From the Native perspective, these are interconnected,” she says.

Native hunters and gatherers have lived in the Escalante Valley for thousands and thousands of years, where they collected and consumed wild potatoes. But over time, the history of the area’s wild tubers had faded.

Louderback, the Natural History Museum of Utah’s archaeology curator and a University of Utah assistant professor, developed a technique for analyzing the starch. She and Pavlik’s team found five sites where the potato grew wild in Escalante area, once called Potato Valley.

Their field study led them to Escalante resident Delane Griffin, a descendant of the area’s white settlers, who grew the potato plant in his garden. He told researchers he remembered foraging for the wild potato as a kid to eat during the Depression.

In Red Butte’s greenhouses, Pavlik learned how to cultivate the Four Corners potato. He and Louderback are working with Wilson and other Native experts to explore commercial opportunities for conserving and growing the potato — and possibly other ancestral plants. But those projects, if they go forward, will be grounded in Native beliefs about the inherent spiritual values of indigenous plants.