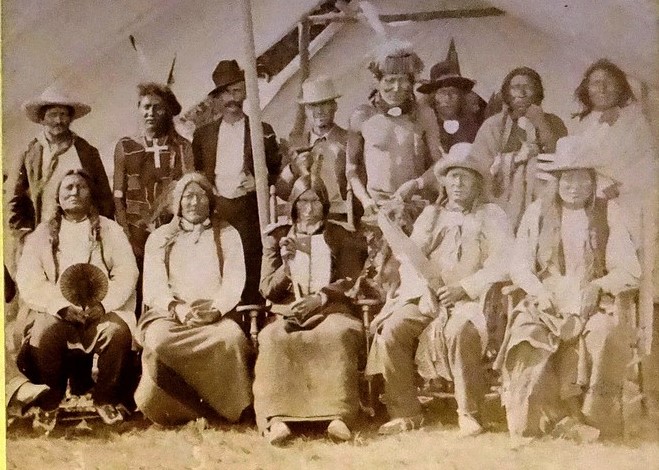 This bibliography was prepared by John Flynn, of the American West Center at the University of Utah, and includes monographs, articles, websites, digital exhibits, online resources and government documents. This bibliography including interesting pull quotes that speak to the intersection of Native Americans and railroads. We offer this as a biblio-primer, and means to get better acquainted with the topic prior to the May 19-21, 2022 history gathering in Ogden, Utah.

“That the treaty process could be manipulated to serve white political and economic interests is well illustrated by the series of treaties made with Indian tribes and bands in Kansas. There the pressure to develop railroads through Indian reservations and to dispose of Indian lands for the benefit of railroad corporations influenced the Indians as well as the white citizens. The Delawares made treaties in 1860, 1861, and 1866 in which they accepted allotments (reserving some lands to be held in common) and sold the surplus lands, not to the government but to railroad interests, and then finally withdrew from Kansas altogether to”

Gage, Justin. “Intertribal Communication, Literacy, and the Spread of the Ghost Dance.” University of Arkansas, 2015. https://scholarworks.uark.edu/etd/1418.

“The Committee on Indian Affairs to whom was referred the bill (H. n. 5868) to authorize the construction and operation of railroads through the Indian Territory, have bad the same under consideration, and respectfully report the same back with the recommendation that it lie on the table, and, as a substitute therefore they direct the bill here-with submitted to be reported to the House for favorable action.

The purpose of the original bill (H. R. 5868) and of the bill herewith reported is identically the same, and both seek to provide by general legislation for the granting of rights of way across the Indian Territory that have heretofore been granted to special corporations, and by special acts.”

“The problems presented by our relations to the Indian tribes which still inhabit portions of the western States and Territories are every year making more imperative demands for a fixed general policy that shall give some reasonable probability of an early and satisfactory solution. The completion of one of the great lines of railway to the Pacific coast has totally changed the conditions under which the civilized population of the country come in contact with the wild tribes. Instead of a slowly advancing tide of migration, making its gradual inroads upon the circumference of the great interior wilderness, the very center of the desert has been pierced. Every station upon the rail way has become a nucleus for a civilized settlement, and a base from which lines of exploration for both mineral and agricultural wealth are pushed in every direction. Daily trains are carrying thousands of our citizens and untold values of merchandise across the continent, and must be protected from the danger of having hostile tribes on either side of the route. The range of the buffalo is being rapidly restricted, and the chase is becoming an uncertain reliance to the Indian for the sustenance of his family. If he is in want he will rob, as white men do in the like circumstances, and robbery is but the beginning of war, in which savage barbarities and retaliations soon cause a cry of extermination to be raised along the whole frontier.

“The wonderful emigration to our newly acquired States and territories, and its effect upon the wild tribes inhabiting them and plains and prairies, is well calculated at the present period to a special attention. Not only are our settlements rapidly advancing westward from the Mississippi river towards the Pacific ocean, from the shores of the Pacific eastward towards the Mississippi river but large settlements have been made in Utah and New Mexico between the two. Already the settlements of Texas are extending up to El Paso and spreading into the Gadsden purchase, and those of California have reached into the great valley of the Colorado, whilst the settlers of Minnesota are building cities at the very head of Lake Superior and villages in the remote valley of the Red River of the north, on their way to Puget Sound. Railroads built and building, from the Atlantic and Gulf cities, not only reach the Mississippi river at about twenty different points, but are extending west across Louisiana, Arkansas. Missouri, and Iowa. Roads of that character have also been commenced in Texas, looking to El Paso, and in Iowa, looking for the great bend the Minnesota river for a present and for Pembina for a future terminus. The railroad companies of Missouri and Iowa are even now seeking aid from Congress to enable them to extend their roads to New Mexico, Kansas, Nebraska, and Utah, and thence to California, Oregon, and Washington. California has actually commenced the construction of a railroad leading up the Sacramento valley toward Utah. It is impossible to avoid the conclusion that in a few years, in very few, the railroads of the east, from New Orleans to the extreme west end of Lake Superior, will be extended westwardly up towards the Rocky mountains, at least as far as good lands can be found, and that roads from the Pacific coast will be built as far east as good lands extend; and that in both cases an active population will keep up with the advance of the railroads a population that will open farms, erect workshops, and build villages and cities. When that time arrives, and it is at our very doors, ten years, if our country is favored with peace and prosperity, will witness the most of it; where will be the habitation and what the condition of the rapidly wasting Indian tribes of the plains, the prairies, and of our new States and Territories?
As sure as these great physical changes are impending, so sure will these poor denizens of the forest be blotted out of existence and their dust be trampled under the foot of rapidly advancing civilization, unless our great nation shall generously determine that the necessary provision shall at once be made, and appropriate steps be taken to designate suitable tracts or reservations of land in proper localities, for permanent homes for, and provide the means to colonize, them thereon. Such reservations should be selected with great care and determined upon and designated the assurances by which they are guaranteed to the Indians should be irrevocable, and of such, character as to effectually protect them from encroachments of every kind. Before bringing this annual report to a conclusion, I desire to repeat the statement made in the first one which I had the honor to submit, that: “There is no absolute necessity for the employment by Indian.”

“In the report of the agent of the Pa-vi-o’-tsoes belonging to the Walker River and Pyramid Lake reservations, these Indians are estimated to number 800. They seem to be making substantial progress in civilization, cultivating the soil to the extent of the facilities afforded on the reservations, and support themselves largely by fishing, selling the surplus products of the fisheries at good rates to the people of the railroad towns adjacent. There appears to be no reason to change the opinion expressed in the statement made last June that the Indians should be removed to some other place where they can become agriculturists. Since that communication was made additional reasons for such a removal have appeared. It is probable that the Central Pacific Railroad Company is entitled to a part of the land embraced within the reservation, under the grant; made to it by Congress. If this should prove true, it would be necessary to purchase such lands in order to secure these reservations for the use of the Indians, and when so purchased they would be entirely inadequate to their wants. Doubtless the Indians themselves would raise very serious objections to the removal, but they are industrious, intelligent manageable people, and it is believed that if the necessities for the removal were properly represented to them, and, in addition to this, they are given substantial evidence that good lands will be secured to them, and that they will receive valuable aid by being supplied with farming-implements, seeds, cattle, &c., they would eventually consent to the removal. From the best information at the command of the commission and after making diligent inquiries, it is believed that there are about 1,000 Indians allied in language to these Pa-vi-o’-tsoes, yet distributed about Western Nevada and Northeastern California. During the past season the commission met many of the chiefs and principal men of these tribes. They, like the other Indians of Utah and Nevada, are anxious to obtain lands. Doubtless no great difficulty would be met in inducing them to go on a reservation; but within the territory inhabited by them there are no unoccupied lands which could be secured for their use. To the north, on the Malhenr River, there is a reservation of what is represented to be good land, well watered, and with abundance of timber. On this reservation there are about 500 Indians, allied to these of Nevada and California. The commission deem it wise that an effort should be made to consolidate all these Indians, namely, the Indians already on the Malheur reservation, the uncollected tribes in Western Nevada and Northeastern California, and the Indians who belong to the Walker River and Pyramid Lake reservations. The total number of such Indians would be about 2,300.”

“The past year has been one of activity in the production and building of numerous additional railroads through Indian lands. The wisdom of Congress in granting such charters to railroad companies will, I believe, be demonstrated by the benefits to the Indians that will eventually result therefrom.”

Do you want to experience more regarding this history? Come and be a part of the “Railroads in Native America” Gathering, May 19-21, 2022 at the Ogden Union Station. Attendance is free, either in-person or by attending remotely; however, registration is requested, click here.

Click here to go back to the RNA Home Page

Click here to go back to the RNA Blog