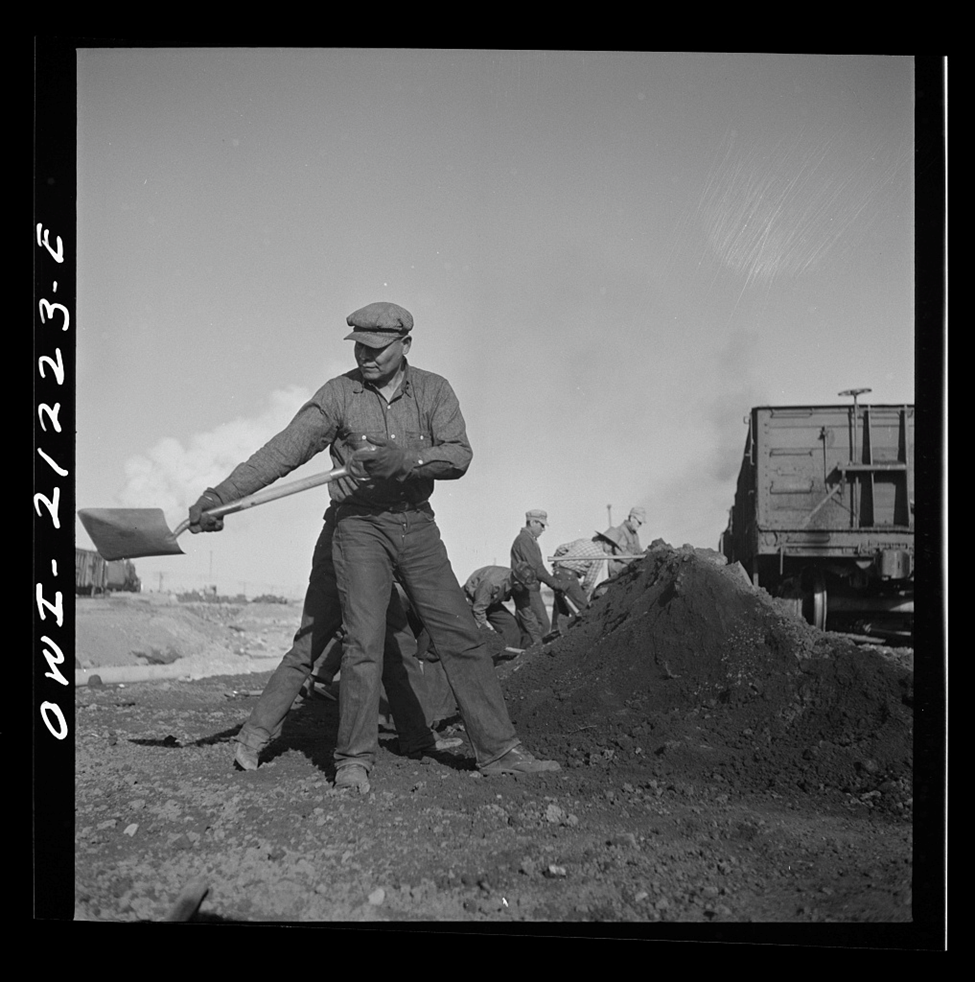 02.23.2022. The above image is a photograph of an unidentified Native American railroad worker at the Winslow, Arizona Atchison, Topeka and Santa Fe Railroad yard. Photograph by Jack Delano (1914 – 1997). Courtesy of the Library of Congress.

What does Diné artist Leo Platero remember about his railroad worker father? In the late 1950s Leo’s father, silversmith Sam Platero, worked seasonally on a section gang for the Santa Fe Railroad (the Atchison, Topeka & Santa Fe Railway). The senior Platero’s work included replacing rails, rebuilding trestles, adding gravel or ballast around railroad ties, replacing railroad ties and securing loose spikes. The work was dirty and hard. If his work-week ended too far from home, his work days as well as his weekends where spent in a bunk car, adjacent to the work site.

When Sam was at home he told his children stories about his work. So far as Leo remembered as a child, they were often scary and fantastical stories, stories that only a young boy would remember. Living twenty miles outside of Grant, New Mexico, the senior Platero and his wife lived in a traditional hogan on the Navajo Reservation. Before and after working for the Santa Fe, Sam and his father before him, worked as traditional Navajo silversmiths. Leo remembered his father making Concho bells. Sam’s wife was a Navajo rug weaver. It was their life, in the Diné arts and crafts, which drew Leo into his own life as an artist. Leo’s first job, after graduating from art school, was teaching at the Internountain Indian School (1950-1984) in Brigham City, Utah.

Sam Platero severely damaged a finger while stacking railroad ties. Leo remembered his father often raising and holding his injured hand up in the air, which allowed him some relief from the throbbing pain. After he injured this finger, a railroad foreman took him to a distant doctor’s office; the physician recommended amputating the injured finger. Sam insisted on keeping it intact and so they sewed it up the best they could.

Leo remembers his father telling him about a man who must have ran in front of a freight train and was killed; and that it took some time for his mangled remains to be discovered. In another recounting Leo remembers his father describing how he couldn’t sleep, due to the previously injured finger, and in his sleeplessness, he heard the distant cries of a fellow railroad worker, who in a drunken state had fallen beneath the wheels of an oncoming train, severing both his legs. Sam woke-up his bunk mates, and together they ran to the seriously injured man, and with their belts tied off his severed legs. The act saved the man’s life. Leo said his father, years later, saw this man in a wheelchair. Had it not been for his injured finger and his inability to sleep, the man would have been unheard, and would have, likely, died from his injuries.

Another time the section crew was told a scheduled train would soon be coming; however, their foreman told them to keep working, and not to leave until their task was completed. Their official instructions were to get onto a siding (a short looped track adjacent to the main track) until the train passed. Working on the edge of a wide bend, the crew was using a rail pump truck, to carry equipment and supplies, and to transport the small crew. The bend offered only the shortest of views, and the inevitable happened, the train came streaking towards them. Sam, his surprised foreman, and the other men frantically pumped this hand truck, but to no avail, all jumped off the truck to save their lives. The pump truck was blown off the tracks. Leo remembers his father telling him that all the shovels, bars and wrenches blew high in the air, and then rained down upon them. Leo remembered his father telling him “the foreman said stay and get the work done.”

Thousands of Native American worked for the Santa Fe Railroad. Today these employees, of the descendent BFSF Line (the Burlington Northern and Santa Fe Railway), are represented and supported by the BNSF tribal relations group.

Come and be a part of the “Railroads in Native America” Gathering, May 19-21, 2022 at the Ogden Union Station. Attendance is free, either in-person or by attending remotely; however, registration is requested, click here.