The Ute Mountain Ute Tribe is one of the tribes of the Ute Nation. Their reservation is located in southwest Colorado, southeast Utah, and northern New Mexico. The two communities on the reservation are at the tribal headquarters in Towaoc, Colorado and in White Mesa, Utah.

The White Mesa Community is party of the larger Ute Mountain Ute tribe, whose headquarters are in Towaoc, Colorado. The community is located 12 miles south of Blanding, Utah.

Contact with the Spanish, and eventually Mormons, changed their way of life and in 1868 they signed a treaty that forced them to western Colorado Territory. The Weenuche band resisted reservation life for many years, however in 1923 they were confined to small allotments in San Juan County, Utah. This made their traditional lifestyle impossible. Farming was unsuccessful, so they turned to raising sheep, cattle, and horses. Starting in the 1950s, the Utes started building houses on the land south of Blanding, which created the community known as White Mesa. 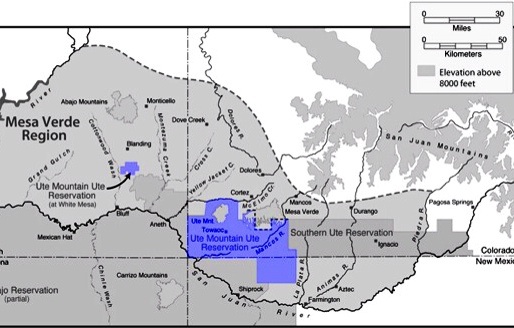